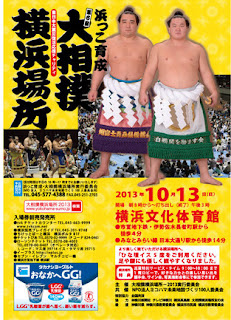 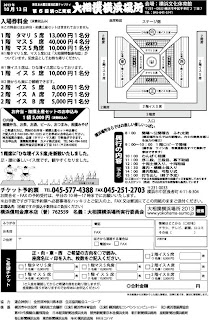 <***What is Sumo?***>
Sumo wrestling is a traditional Japanese sport by men.
Two sumo wrestlers (力士 rikishi) fight on Dohyo (土俵) ring. If one steps out of Dohyo or puts a hand on the ground, he loses.
The wresters are divided into two groups in each tournament (which usually lasts for 14 days): East (東 higashi) and West (西 nishi).
If a wrester wins, he gets one white star (白星 shiroboshi) and if he loses, he gets a black star (黒星 kuroboshi) and the one who gets the most white stars wins the tournament. If a lower rank wrestler beats a top wrester (横綱 Yokozuna), it is called a "gold star (金星 kinboshi)".

The wresters belong to a team called "Room (部屋 heya)" and practice under a coach（親方 oyakata) of the room. Sometimes the ring names of wresters in a same team share a same kanji. There are many wresters from foreign countries but the number of them in each room is limited now.

There are women sumo nowadays but the professional sumo doesn't allow any women in the ring.

You can also refer the official website of Nihon Sumo Kyokai