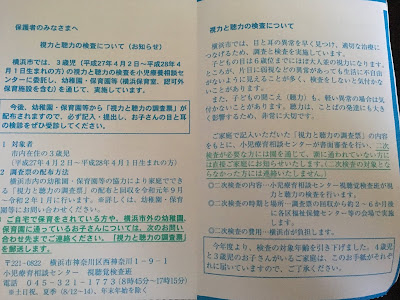 Some of you might have received this letter from the city of Yokohama. This is an announcement for the visual and audio checkup for three-year-old children (turning four this before next April). It says from this fiscal year (or school year/ from April to March in Japan),  they pulled down the target age from four to three, so if you have a four-year-old(s) and a three-year-old(s), you receive the letter for both (or all) of them this year.

If your child(ren) is already enrolled in a school (nursery or kindergarten), you will receive the checkup questionnaire sheet through your school (between September 2019 and January 2010).

If your child(ren) stays at home or goes to school outside Yokohama, contact the Children's Health Council Center (the address and the number on the bottom of the left side page). They'll ask your child(ren)'s name, birthdate, address to send the questionnaire after October 2019. Then you are supposed to sent it back in two weeks. They'll enclose a return envelop so you won't need to pay for the postal stamps.

If they judge that your child(ren) needs more detailed checkup, they'll send you another letter (and the checkup will be free of charge) . If not, you will receive nothing.

The page about the checkup on the website of the city of Yokohama (though they only talk about four year olds).
https://www.city.yokohama.lg.jp/kurashi/kosodate-kyoiku/oyakokenko/teate/shityoukaku.html